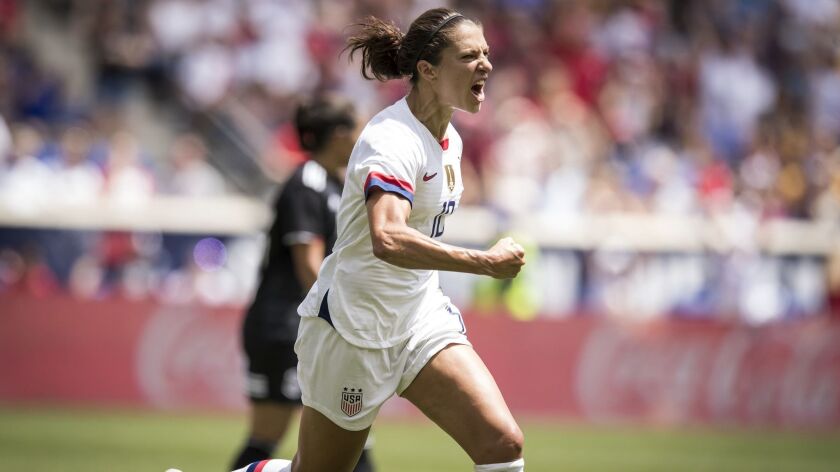 World Cup was a difficult time for Carli Lloyd

The U.S. women’s World Cup team captivated much of America over the summer, but there was one person not so captivated: Carli Lloyd, one of the stars of the team.

Lloyd found herself in the unfamiliar role of coming off the bench during the World Cup. And she hated it.

“I’m not going to lie and sugarcoat it,” Lloyd told former U.S. player Julie Foudy on Foudy’s ESPN podcast. “It was absolutely the worst time of my life. It affected my relationship with my husband, with friends. It really was rock bottom of my entire career. There’s no denying it. I deserved to be on that field that whole World Cup, but I wasn’t. And I think I’ve grown as a person, as a player. It sucked. It absolutely sucked.”

But she has no bitterness toward her teammates.

“I was super happy for my teammates and happy for Megan [Rapinoe], who put the team on her back, and for several other players,” said Lloyd, the star of the 2015 World Cup. “It was great to see, and I’m happy that I could still have been a part of it.”

It appears Lloyd is saving her bitterness for coach Jill Ellis, who has retired, and hopes she can have a bigger role in the 2020 Olympics.

“I hope a coach comes in that values me, respects me, wants me [as] a part of the Olympic plans,” Lloyd said.

“My locker was right there, right when you walked into the clubhouse, straight on,” Frandsen said. “Bochy walks in … he’s not graceful when he walks, he just kind of lumbers in there and he was pissed. And we knew he was pissed. We were playing bad. He just goes right by me, into my locker and there’s my bat that’s sitting right there, and he looks at it and gives me like a grunt, the old grunt that he does.

“He walks over to the TV and he gives it one whack. It doesn’t go. It pisses him off even more, and he obliterates the next screen. He puts the bat back in the locker and walks right to his office.

“Everyone’s sitting there like, ‘Oh yeah, we got the message! Hey, TVs off 6:45 here we go fellas!’ I mean it was frightening. That’s Boch. There you go.”

What is your favorite all-time L.A. sports moment? Email me at [email protected] and tell me what it is and why and it could appear in a future daily sports newsletter or Morning Briefing.

This moment comes from Carol Cling:

My favorite memory has to do with the 2002 World Series.

I was visiting my mom in Fullerton and felt duty-bound to join her and her longtime companion at dinner, which meant missing the sixth game. Things were looking so grim for the Angels anyway, I figured the seemingly inevitable loss would be easier to bear if I didn’t have to watch it.

But, at our favorite Persian restaurant in Anaheim, other Angel diehards were among the diners — including one guy who kept running out to check the score on his car radio. He returned every time with a sorrowful shake of his head. That is, until the moment he burst back into the restaurant screaming “Spiezio just homered! Spiezio just homered!” The entire restaurant erupted in cheers and the owner brought a radio into the dining room so we could all share the amazing comeback together.

I’ve seen video of that game many times (and still have the Dick Enberg-narrated commemorative VHS video of the Angels’ triumphant 2002 season). But in that case, not seeing it — except in the collective mind and heart of everyone in the place — created an indelible memory that still makes me glow.