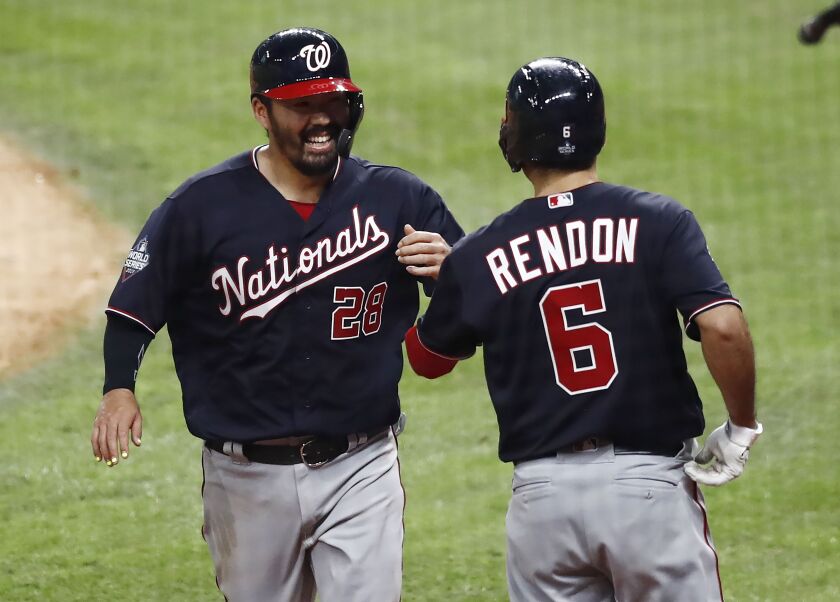 The Washington Nationals, oddsmakers’ steepest World Series underdogs in more than a decade, toppled the seemingly untouchable Gerrit Cole and staved off a bullpen collapse to steal Game 1 from the Houston Astros 5-4 at Minute Maid Park on Tuesday night.

Ryan Zimmerman, the Nationals’ first draft pick, in 2005, produced the franchise’s first Series run with a home run in his first plate appearance. Juan Soto, who turns 21 on Friday, became the fourth-youngest player to hit a home run in a Series and the second-youngest to do so in his debut. He also hit a two-run double.

The damage was shockingly inflicted against Cole, who went 20-5 in the regular season. The right-hander gave up five runs and eight hits in seven innings. He took the loss after winning a season-record 19 consecutive decisions.

“To be able to get some runs off a guy like Gerrit, that guy has been the best pitcher in baseball for the last, whatever, four months,” Zimmerman said. “He’s a special pitcher and we had a good plan tonight. We executed and, luckily for us, he made some mistakes.”

Max Scherzer gave up two runs in the first inning but pushed through five innings before the ball was handed to the Nationals’ thin bullpen. The relief corps, with starter Patrick Corbin deployed to work a scoreless inning, held on.

It is a stunning result that has vaulted the Nationals’ chances to defeat the 107-win Astros for the first Series title in franchise history, and it took a backseat to an Astros front-office executive’s alleged behavior and the organization’s response over the previous 24 hours.

Last season, the Astros traded for reliever Roberto Osuna as his 75-game suspension for allegedly assaulting the mother of his child in May 2018 was coming to an end. General manager Jeff Luhnow said then that the team had a “zero-tolerance” policy but was willing to grant players a second chance after making mistakes with another franchise.

Osuna had given up a tying two-run home run in the ninth inning against the New York Yankees.

One of the reporters was wearing a purple bracelet for domestic violence awareness. The woman regularly tweeted the phone number for a domestic violence hot line when Osuna pitched last season after the Astros acquired him. The story says another Astros staffer apologized for Taubman’s eruption.

The Astros did not apologize. Instead, shortly after the story appeared on the magazine’s website, the team released a statement confirming Taubman’s outburst but contended the reporting was “misleading and completely irresponsible.”

“We are extremely disappointed in Sports Illustrated’s attempt to fabricate a story where one does not exist,” the statement said.

Tuesday afternoon, Major League Baseball announced it was launching an investigation. A few hours later, Taubman and Astros owner Jim Crane each released a statement. Crane didn’t address the specific allegations. Taubman said he was “sorry and embarrassed” for his “unprofessional” and “inappropriate” comments. He blamed the outburst on his “overexuberance in support of” Osuna. He insisted the behavior was “misinterpreted.”

“I am sorry if anyone was offended by my actions,” the final sentence read.

Manager A.J. Hinch was the only member of the organization to take a question about the debacle before Game 1 on Tuesday. He said he wasn’t aware of the incident before reading the story and maintained he hadn’t talked to anyone with the Astros about it because he was so consumed with preparing for the Series opener.

“I’m very disappointed for a lot of reasons,” Hinch said. “It’s unfortunate, it’s uncalled for. For me, as a leader in this organization down here in the clubhouse, on the field, I take everything that happens in the clubhouse to heart.”

A few hours later, the Astros were on the field playing for a second championship in three years. They continued the pursuit by taking a lead on Yuli Gurriel’s two-run double in the first inning.

Scherzer struggled to discover a rhythm and reached 69 pitches through three frames. The formula spelled trouble for the Nationals and their weak middle relief. Scherzer would throw 112 pitches in five innings but didn’t allow another run.

Playing their first game in a week after sweeping through the National League Championship Series, the Nationals needed an inning to knock off the rust. Zimmerman crushed a fastball from Cole in the second. Soto smashed another fastball in the fourth inning to tie the game.

The Nationals tallied their final three runs in the fifth on a run-scoring single by Adam Eaton and Soto’s double. Soto said his legs were shaking in his first at-bat, which ended in a strikeout. He finished three for four.

“After the first at-bat I was like, ‘He’s throwing really hard,’” Soto said. “But I just try to sit back and hit the ball all the way.”

Four relievers secured the final 12 outs. The treacherous exercise included Daniel Hudson escaping a bases-loaded jam in the seventh inning and the Astros stranding a runner at second base in the eighth. In the end, it was an outcome few saw coming in the first clash between the clubs. Game 2 is Wednesday.