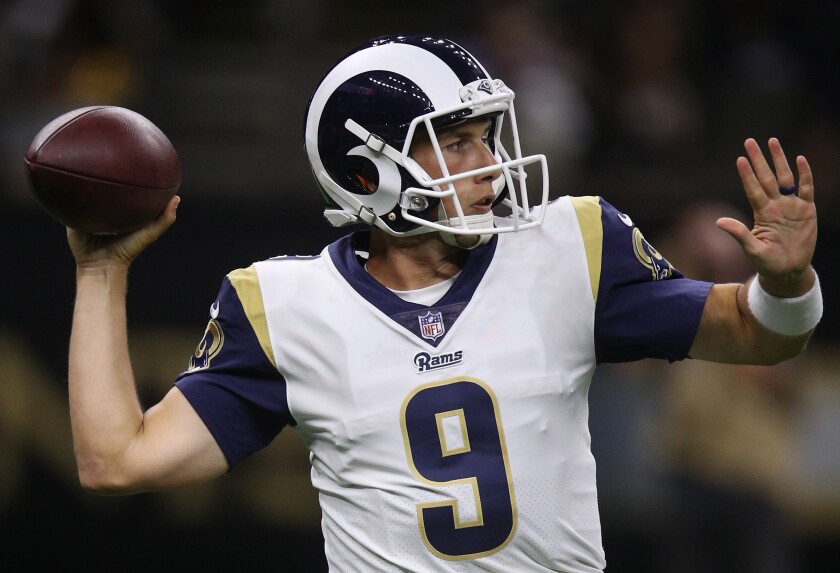 Luis Perez is coming to Los Angeles for the second time in his professional football career.

A former member of the Rams’ practice squad, Perez would appear to have a much loftier role this time around. He was announced Tuesday as the first member, and likely starting quarterback, of the L.A. Wildcats.

The newly reformed XFL is holding its inaugural draft Tuesday and Wednesday, in which all eight teams will fill their rosters through a 71-round process.

Before any of that started, however, the league assigned each team a quarterback — Perez to the Wildcats, Cardale Jones to the D.C. Defenders, Landry Jones to the Dallas Renegades, Phillip Walker to the Houston Roughnecks, Matt McGloin to the New York Guardians, Jordan Ta’amu to the St. Louis BattleHawks, Brandon Silvers to the Seattle Dragons and Aaron Murray to the Tampa Bay Vipers.

The first player in history to call themselves a Los Angeles Wildcat!Welcome to the squad, @PerezLuisQB 💪 pic.twitter.com/QIDGHwA5B5

Perez almost went pro as a teenager — in bowling. He bowled competitively while attending Otay Ranch High in Chula Vista, with 12 perfect games to his credit, and almost applied for a Professional Bowlers Assn. card. But he decided to go a different route.

After teaching himself how to play quarterback by watching YouTube videos, Perez walked on at Southwestern College in 2012 and worked his way up to a starting spot the following season. He later transferred to Texas A&M-Commerce, where he led the Lions to the 2017 NCAA Division II championship and was named the national player of the year.

Perez signed with the Rams as an undrafted free agent in 2018 and played in the final game of the preseason that year.

He was cut before the start of the regular season and has been on the move ever since, spending time on the practice squads of the Rams, Philadelphia Eagles and Detroit Lions, and playing in the short-lived Alliance of American Football for the San Antonio Commanders and Birmingham Iron earlier this year.