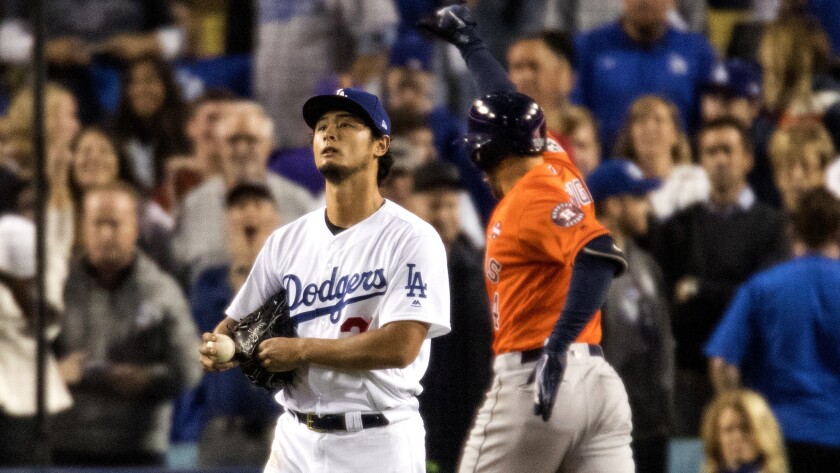 He was like the Olympic athlete who finished fourth, only to learn years later that one or more of the medalists were on steroids.

Or the student denied entry into a prestigious university because his place went to the child of parents who bribed school officials.

As reports surfaced this week detailing how the Houston Astros used electronic equipment to steal signs in 2017, however, Yu Darvish wasn’t upset.

“Because I had that experience, I was able to work hard these last two years and become the person I am now,” Darvish said in Japanese in a video he uploaded to his popular YouTube channel Thursday night.

As a starting pitcher for the Dodgers that season, Darvish had a disastrous World Series against the Astros. He was charged with four runs and lasted only 1⅔ innings in a Game 3 loss. His performance in Game 7 was even worse, as he gave up five runs in an equally short start that delivered the Astros their first-ever championship.

"I feel that if I absolve myself and say it was the Astros’ fault I was bad in Game 7, in the World Series, I can’t develop as a person,” he said. “In life, I think huge failures are extremely important. I’ve had a few up to this point. The World Series was one of them. I think it will remain a point of reference for me. I’ve already learned a lot from it. So regarding that, I can’t view myself charitably. I think I have to continue to accept the results.”

Darvish is two years into a six-year, $126-million contract with the Chicago Cubs. Injuries limited him to eight games in 2018 and he started slowly again this year but recovered to post a 2.78 earned-run average in his 13 starts after the All-Star break.

He acknowledged his World Series failures have bothered him the last two years, in particular because he could never make sense of what happened.

In the immediate aftermath, Astros players said Darvish was tipping his pitches. He was never satisfied by the story. Alarmed by how the Astros reacted to his pitches in Game 3, the Dodgers carefully studied video of him and were unable to come up with any definitive conclusions. Players on that Astros team later told him they watched how he brought the ball into his glove in the set position. With that in mind, Darvish rewatched Game 7. What he saw did not match up with what he heard.

Darvish was surprised by the allegations that surfaced this week in a story by the Athletic. Four people who were with the Astros in 2017, including pitcher Mike Fiers, said the team used a camera in the outfield to steal signs at home games.

Darvish wondered about Game 7 of the World Series, which was at Dodger Stadium.

“What’s been reported up to this point is that they used cameras at their home field, so I don’t know if there was anything like that,” Darvish said. “But what they were doing was so high-level that I can’t honestly say there’s no chance they were also doing it on the road.”

But Darvish didn’t want to overthink the possibilities.

“If you ask me if I got hit in Game 7 because they stole signs, I don’t think so,” he said. “The Astros have great players who don’t have to do that. So I think that whether or not they stole signs, the results wouldn’t have changed.”

The loss was especially devastating because he wanted to repay the Dodgers by helping them win a championship. Before his trade from the Texas Rangers, he was considering retirement. The Dodgers reignited his passion for baseball.

Overcoming the trauma marked one of the greatest triumphs of his career. Darvish pitched for the Cubs at Dodger Stadium in mid-June, his first game there since the World Series. He limited the Dodgers to one run over seven innings, striking out 10.

This was in part what Darvish was referring to when he spoke of the World Series making him the person he is now. If not for the failure, there would be no redemption.

“To return to the place where I had the worst moment of my career, which also happened to be a stadium I really liked, and to pitch as well as I did gave me a lot of confidence,” Darvish told The Times in a phone interview.

In the same interview Friday morning, he said he always maintained warm feelings for Dodgers fans.

Some pitchers etch words or symbols into the mound before they pitch. Darvish isn’t one of them. He made an exception in his return to Dodger Stadium. Beneath the Dodgers logo, he wrote a secret message to the fans, whom he considered a valuable part of his Los Angeles experience.

In recent days, many of the same fans who blamed him for the World Series loss have sent him messages of apology.

“I’m not looking for that,” he said in the video he posted on YouTube. “I don’t want them to change their minds.”

Because he thinks their criticism has shaped who he is today.

Nonetheless, Darvish admitted he was disappointed to learn of the allegations against the Astros.

“The Houston Astros are an organization I really respect and they have a lot of great players,” he said.

He also shared concerns of how widespread the practice of sign-stealing might be.

Darvish recalled a game this season in which he stepped off the mound multiple times because he noticed something unusual. Batters typically have their eyes set on the pitcher. In this particular game, he observed they were looking into left-center field.

“I could have been mistaken, but maybe was placed in center field with a telescope or something who was signaling,” he said.

In this country, stealing signs is considered a part of the game. The reason the Astros’ case has caused such uproar is because of the organization’s alleged use of high-tech equipment. Stealing signs in any form is much less tolerated in Japan. Darvish viewed the practice through that cultural lens.

“What fun is [it] to hit a pitch that you know is coming?” he said. “As a pitcher, it feels weird. As a hitter, I wonder if it makes them happy. Houston won the World Series in 2017, but if they really did that in the World Series and hit like crazy and won … I couldn’t do that.”

He concluded his 14-minute video by calling on major league and Japanese teams to stop stealing signs.