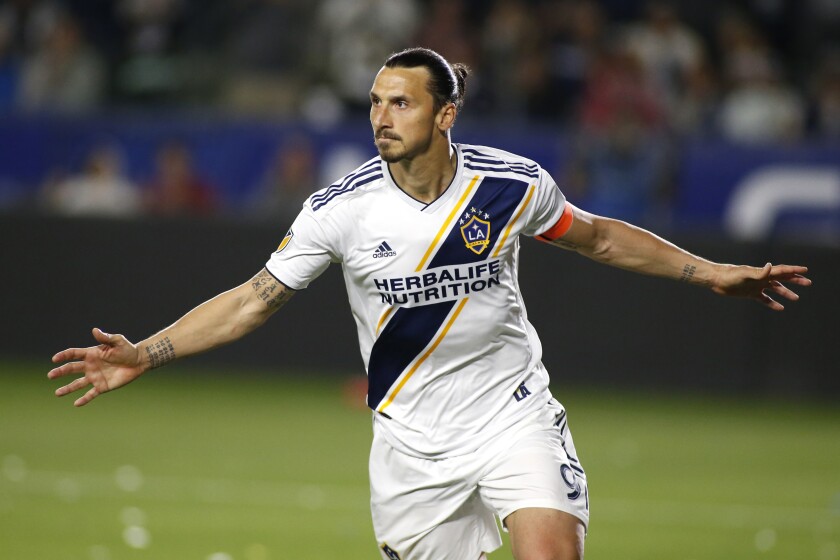 Zlatan Ibrahimovic announces he will not return to Galaxy next season

Zlatan Ibrahimovic’s final shot in Major League Soccer was just as cocky, confident and dramatic as his first.

“I came, I saw, I conquered,” he wrote on Twitter on Wednesday in a good-bye note to Galaxy fans. “You wanted Zlatan, I gave you Zlatan. You are welcome ... Now go back to watch baseball.”

And just like that the man who was arguably the most dominant player in team and league history was gone after 58 games and 53 goals, including a preposterous 40-yard volley on his first shot in a Galaxy uniform.

In his short 21-month stay, Ibrahimovic led the Galaxy back to the playoffs after a two-year absence and kept the team relevant while, 12 miles up the freeway, LAFC and its captain, Carlos Vela, were tearing up the MLS record book Ibrahimovic had promised to rewrite.

The Galaxy, who welcomed Ibrahimovic to Southern California in March 2018 with a full-page newspaper ad, a video featuring a lion and a packed news conference, acknowledged his departure with a simple four-paragraph statement in which they said the decision to part ways was mutual. Team President Chris Klein then thanked Ibrahimovic for his “immeasurable impact on the Los Angeles community and the soccer community in North America.”

I came, I saw, I conquered. Thank you @lagalaxy for making me feel alive again. To the Galaxy fans - you wanted Zlatan, I gave you Zlatan. You are welcome. The story continues...Now go back to watch baseball pic.twitter.com/kkL6B6dJBr

In a separate email Galaxy general manager Dennis te Kloese said he was “very grateful for what he did here” and said he was “sure he will continue in Europe his legacy.”

Ibrahimovic, who came to MLS less than a year after major knee surgery in part to prove his fitness, had hinted broadly in the final weeks of the season that he would likely return to Europe this winter, with Italy’s AC Milan, where he had played before, among the leading suitors.

Before the Galaxy’s playoff opener with Minnesota, he was already speaking about MLS in the past tense.

“I had a good time, good experience. I learned a lot,” he said. “I came from my injury and I came like a little kid that just wanted to play football. MLS gave me the opportunity and I took it.”

He erased whatever doubt remained about his future after his final game, gesturing to a fan by grabbing his crotch, then thumbing his nose at the league in comments to reporters.

“For MLS, it would be good [if I stayed] because the whole world will watch it,” he said. “If I don’t stay, nobody will remember what the MLS is.”

That’s a stretch but there’s no doubt the league will miss Ibrahimovic, who dominated both on and off the field like no player has in the league’s 24-year history.

On the field he welcomed himself to MLS by scoring the game-tying and game-winning goals in a 19-minute cameo in his debut. Six months later he scored on a spinning kung-fu kick in Toronto to become just the third active player, after Lionel Messi and Cristiano Ronaldo, to score 500 goals for club and country.

This year he set a franchise record by scoring 30 times in the regular season, the final goal coming three days after his 38th birthday. Add in his seven assists and Ibrahimovic factored in 37 of the team’s 58 goals, leaving the Galaxy to replace 63.7% of their offense with his departure.

Off the field he called himself a Ferrari among Fiats in MLS, repeatedly criticized the league over everything from officiating and salary cap — Ibrahimovic made a league-record $7.2 million in 2019 — to its playoff structure. He also called himself the best player in the league and in that he wasn’t wrong: During the regular season the Galaxy were 13-5-2 when he scored and 3-10-1 when he didn’t.

That production didn’t come without controversy, though. The Galaxy captain, who needed to stay in the spotlight, was suspended three times during his two seasons in MLS and narrowly avoided penalties in two other incidents, once after entering the visitors’ locker room at Dignity Health Sports Park to confront Real Salt Lake defender Nedum Onuoha and another time for elbowing LAFC defender Mohamed El-Munir, sending the player to the hospital to repair facial fractures.

He also angered teammates with his criticism and by gesturing dramatically when they failed to get him the ball. But he also made people watch, with more than 300 media members showing up for his final game, a loss to LAFC that drew ESPN’s largest audience for an MLS playoff game in two decades.

Ibrahimovic’s decision to leave comes just weeks after German World Cup champion Bastian Schweinsteiger and Wayne Rooney, England’s all-time leading scorer, played their final games in the U.S. Their absences will leave MLS without a big-name European star for the first time since David Beckham joined the Galaxy in 2007.

It also accelerates a roster makeover for the Galaxy, who are likely to rebuild younger, quicker and more technical as Te Kloese tries to find people who can play the pressing, possession-based style coach Guillermo Barros Schelotto used to great success with Argentina’s Boca Juniors. It was not a style that fit well with Ibrahimovic, whose presence forced the coaching staff to adapt.

The team has already parted with Argentine winger Favio Alvarez, whose option was not picked up, and defender Dave Romney, who was traded to Nashville on Tuesday. In addition midfielder Uriel Antuna, on loan from Manchester City, appears unlikely to return and Te Kloese has contract decisions looming on several others, including midfielders Sebastian Lletget and Romain Alessandrini and defenders Daniel Steres and Diego Polenta.

“In the upcoming weeks there will be a lot of traveling and a lot of looking at players and a lot of assessing of where we should be reinforcing,” Te Kloese said.